A Course of Love /
Get Acquainted: Welcome
Library of Christ Mind Teachings
A Course Of Love

About A Course Of Love

The three books in the combined volume, The Course, The Treatise, and The Dialogues are easiest to understand when read in sequence from beginning to the end. 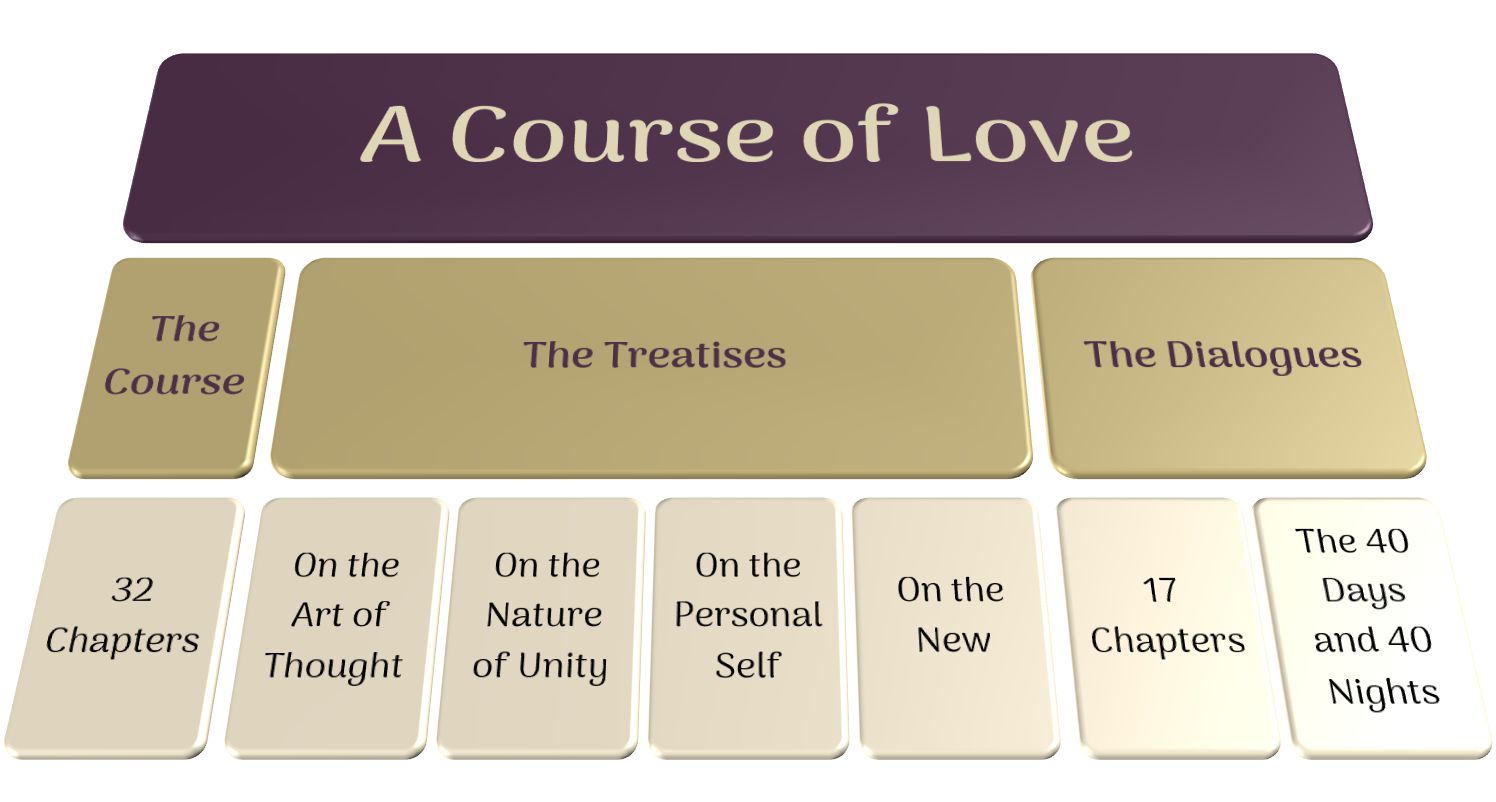 The Course: the first book in A Course Of Love

Here you are gently and gradually guided along the way to knowing your true Self. ACOL foresees that the mind will be puzzled by the word “love” and ask, “Why is this book called A Course of Love?”

The word love is part of your problem with this Course. If I were to take the word love and change it to some sophisticated-sounding technical term, and say this is the stuff that binds the world together in unity, it would be easier for you to accept.

If I were to say you know not of this sophisticated term and this is why you have believed in your separation rather than in your unity with all things, you would be far more likely to nod your head and say, “I was but ignorant of this, as was everyone else.”

If a scientist were to tell you that a benign energy had been found that proved your connection to everything in the universe, and gave it some fancy name, you would say, “A new discovery has been found and I am willing to believe it may be true, especially if others are also going to believe it to be true.”

You feel a little duped at being told love is the answer. Letting go of what your mind would tell you in favor of what your heart already knows is but the purpose of this Course.

The mind may say, “Yes, yes, I know. Tell me something I don’t know.” The mind may reel at contradictions, cling to known truths, compare this wisdom to other wisdom. The mind will attempt to understand with its own logic and fight the logic of the heart.

The purpose of this Course is to establish your identity. This is a course for the heart. The birthplace of the new. We take a step away from intellect, the pride of the ego, and approach this final learning through the realm of the heart.

The Treatise: the second book in A Course Of Love

While The Course describes the foundational principles on which our true Self rests and seals the rift between mind and heart, The Treatises help us to bring that wholehearted connection into everyday life.

The Treatises show you how to live as who you are, how to act within the world as the new Self you have identified. [They] are no longer concerned with coursework as the work of this Course has been accomplished in you. These Treatises are simply concerned with assisting you to live what you have learned.

Learning is not meant to last. You have realized that all of your learning and studying has taken you as far as you can go.

The Dialogues: the third book in A Course Of Love

As the title suggests, The Dialogues are an exchange between the reader and Christ-consciousness, which is present in all that she or he is in relationship with. You are invited not only to listen but also to respond.

The Dialogues culminate in an intensive “40-day experience” that takes place in your inner world: “The Forty Days and Forty Nights.” It’s a preparation to live in the world in unity and relationship with all of life, continuously listening and responding to every aspect of creation.

The Dialogues place us on the way of direct knowledge. This is the new way of coming to know your Self, the way of sharing in unity and relationship.

Creation of the new has begun. We are an interactive part of this creative act of a loving Creator. Creation is a dialogue. Creation—which is God and us in unity—will respond to our responses. Will respond to what we envision, imagine and desire.

What will the future hold? It is up to us creating as one body, one mind, one heart. Because it is the new future of a new form joined in unity and relationship, the only guarantees that are known to us is that it will be a future of love, a future without fear, a future with unlimited freedom.

You can learn much more about A Course Of Love and Mari Perron at acourseoflove.org.

Welcome to A Course Of Love Search…

Send Us Your Data

Thank you for supporting the Library!!

The recording has finished and data collected. Please fill the form below and press 'Submit' to send us the timing data you captured.

Timing data exists for this session. Please confirm that you want to modify the existing timing.